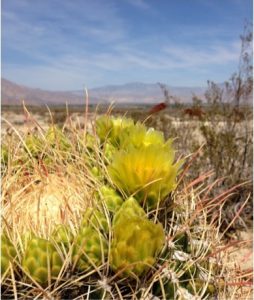 *The impacts of heat waves on human health

*Coastal expressions of heat waves, including those associated with Santa Ana winds 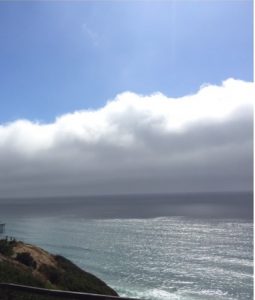 Coastal clouds (May Gray and June Gloom, as they are known in Southern California) moderate temperatures for a huge and diverse coastal population in the summer when it can be much hotter just a few miles inland. In addition to cooling the coast, coastal species such as Torrey Pines and Redwoods rely on low clouds and fog for water and shading during the Mediterranean long dry summer. Airports alter their air traffic flow based on these clouds and the demand for as well as the supply of electricity from solar panels is strongly impacted by the presence or absence of marine layer clouds.  Our group is studying cloud behavior and impacts through research topics including:

*The role of clouds in modulating heat waves in coastal California 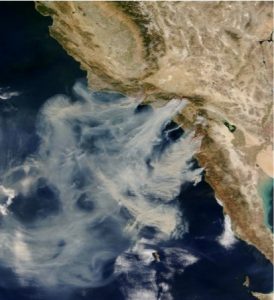 Santa Ana winds (SAWs) are an important regional weather pattern in Southern California.  They are identified as hot, dry downslope winds and are linked with the most destructive wildfires, as well as with several negative environmental health impacts such as transport of air pollutants, including smoke from backcountry fires. They are also responsible for heat waves that occur in the fall, winter and spring in coastal Southern California. We study Santa Ana winds, as well as their northern cousins (Diablos), and their impacts including:

*Natural variability of Santa Ana winds and their characteristics 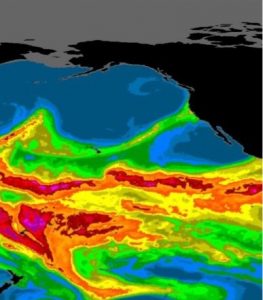 Atmospheric rivers (ARs) transport moisture from the tropics to the higher latitudes. Flowing over the Pacific Ocean in long, thin ephemeral filaments, they can generate extreme precipitation over land when their moisture-laden winds encounter mountains. California’s mountain ranges are ideally (perpendicularly) oriented to landfalling ARs, which contribute the lion’s share to the region’s water supply and its variability. ARs are also the major causes of historical floods in the West.  Our work on atmospheric rivers includes: 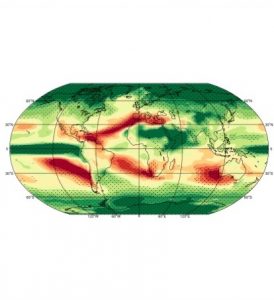 Our published research shows that, while precipitation will become less frequent in Southern California as the climate continues to warm, atmospheric rivers will carry more moisture and cause more extreme precipitation. With less frequent but more extreme rainfall, year-to-year precipitation becomes more volatile. The recent years of historic drought (2012-2016) followed by record wet winter 2017 and a record-dry water year 2018, is an example of such volatility, which we expect to see more of in the future.  Our research focuses on:

*Precipitation regime change in Mediterranean climate regions around the globe 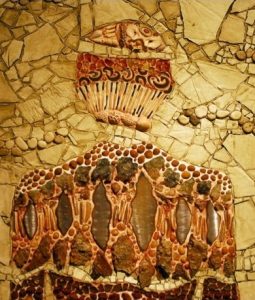 Impacts on Human Health and Society

Our research aims to quantify and clarify the relationships between extreme weather events and human health, with a view towards better predictability of their impacts. We also aim to emphasize the environmental justice component of such impacts through the identification of vulnerable communities. Better predictive capacity is intended to inform and improve public health coordination and planning among stakeholders across the region.  Our research topics include: